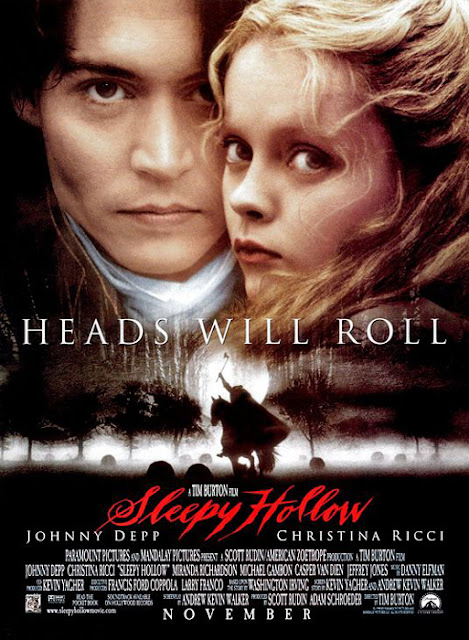 „The horseman was a Hessian mercenary sent to the shores by German princes to keep Americans under the yoke of England. But unlike his compatriots, who came for money, the horseman came for love of carnage.”

There are only a few days until Halloween, a celebration of Celtic origin dating back hundreds of years, which is very popular in the United States. So I want to make some special reviews for Halloween, the first one is “Sleepy Hollow” (1999), a film directed by Tim Burton, with Francis Ford Coppola (he directed “The Godfather”) as an executive producer, and with Johnny Depp and Christina Ricci in the lead roles.

I have seen this movie many times, the first time at the age of 11-12 (when it scared me), and since then I see it every year during this time of year. The film tells the story of Ichabod Crane (Depp), a New York detective who is sent to the village of Sleepy Hollow to solve a series of gruesome crimes, the victims being found beheaded. He reaches the destination full of hope in elucidating the mystery but is brought back to earth by the village councilors, who tell him that the murderer is a headless warrior, from the land of the dead, who kills the night riding on a black stallion. During the film Ichabod is helped by an orphan boy, whose father was one of the rider’s victims, to solve the mystery, since the headless rider did not kill randomly.

As a story, that would be all you need to know because this movie is worth watching at least once. I want to mention the cinematography made by Emmanuel Lubezki, who, together with the director Tim Burton, creates a perfect atmosphere for a horror film, with almost monochrome effects, and you will also see how often the fog is used, which contributes to a frightening atmosphere. The soundtrack is very good also, which is just as scary but perfectly interwoven with the action.

On the actor side, I want to mention Johnny Depp, who has a pretty good interpretation, but who doesn’t stand out at all, like the adorable Christina Ricci, who at the time of the film was only 19 years old, although in the film it seems much younger. The film does not impress on the acting side of the actors, but more on the story, the script and the cinematography.

I want you to end by recommending this movie, which in my opinion will remain a classic horror movie. Enjoy!

Director: Mamoru Kanbe Starring: Sumire Morohoshi, Maaya Uchida, Mariya Ise Genre: Anime, Fantasy, Horror “Would you leave that person behind? Or take them with us?”   It’s been a while since my last anime review Read more…