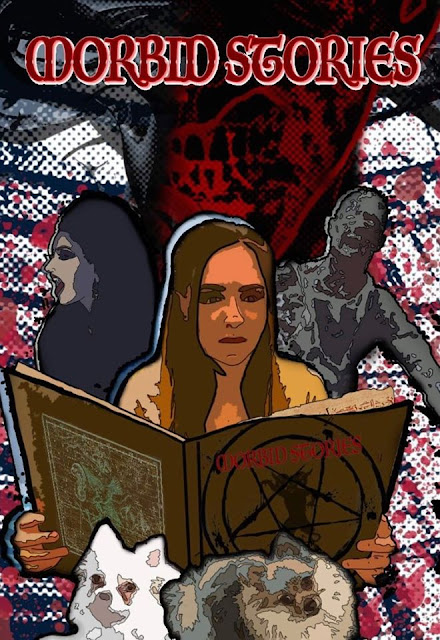 I know Halloween passed by and Christmas is near, but I want to talk about a horror movie, a short and low-budget horror movie. Morbid Stories is an anthology with 5 separate stories with a length between 10 and 20 minutes, which covers almost every theme of a horror movie, such as vampires, zombies, and ghosts.

The story begins with Candy (Courtney Akbar), a young woman who has been through a breakup recently, which is why she will return to her parent’s house. I could say this is the main story because the movie starts and ends with it. I liked Courtney, although she didn’t have many memorable moments. The second story, one of my favorite, presents a very uncomfortable situation: to let a stranger in your house for a good purpose. I liked the long-haired stranger (Tim O’Hearn) and Lola (Jocelyne Daugherty), who made pretty good acting in my opinion. The third story was a little bit boring, but in the end, was more exciting. The fourth story was written very well. Robert Zirn (Will Devokees), a writer without any inspiration for his new book. He stays alone in a cabin, rented by his assistant and at one point hears something up on the roof. The fifth and the last story is a very interesting one because we see what happens when a zombie bites a vampire. But the ending of this promising story is not that good, as the premise of it.

Being a low-budget movie I didn’t have any big expectations, I just wanted to see some ideas, which might inspire other directors and screenwriters; and I saw that. Almost every story has something I liked and in the end, I don’t regret watching this movie. On the contrary, I’ll watch it again next year around Halloween. I think you should watch this movie at least once, to see some great and original ideas. I like to support independent movies by promoting them and that’s why maybe in the future I’ll write again about a film like this.

I hope the directors and writers will continue to work on this project and maybe, who knows, we’ll watch a sequel of Morbid Stories in the next years.

You can watch it on Amazon: https://www.amazon.com/dp/B07ZHMSQDT.

Director: Mamoru Kanbe Starring: Sumire Morohoshi, Maaya Uchida, Mariya Ise Genre: Anime, Fantasy, Horror “Would you leave that person behind? Or take them with us?”   It’s been a while since my last anime review Read more…