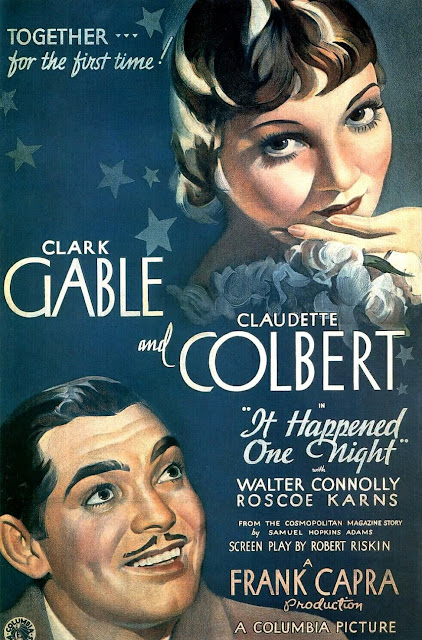 “In the happy ignorance of the “Golden Age”, a 100 minutes comedy could become, in the eyes of Academy, the biggest celebration of cinematography.” said Palos Mate, a writer on a Romanian blog.

One of the best movies from Frank Capra, the winner of the Big Five (Best Picture, Best Actress, Best Actor, Best Director, and Best Writing), brings us a love story between Peter Warne (played by Clark Gable), recently fired from his newspaper job, and Ellen “Ellie” Andrews (played by Claudette Colbert), a spoiled heiress who jumps ship from her father’s yacht after a fight over her marrying wealthy playboy King Westley, without her father’s consent.

Ellie wants to get to New York to meet King Westley, so she takes the Night Bus, where she meets the handsome Peter Warne. He recognizes her from a newspaper, where it writes about her story, and he offers to help her to get to Westley, if she gives him an exclusive story, to win back his job. And so the fun begins. Colbert and Gable have such great chemistry, especially when they are at a lodge and some police officers check for Ellie. They create a huge fake fight, which is one of the funniest scenes of the movie. Another great scene is the one on the bus, where some musicians start singing a 19th-century popular song named “The Man on the Flying Trapeze” (this is my favorite moment from the movie). And of course, I must say something about the “lesson in how a man undresses”, where Peter teach Ellie how a man should undress. There are a lot of great and funny scenes, but I will let you discover them.

A master in his profession, Capra left his mark on the films he directed. Although this is one of his first movies, it will remain in history for one of the greatest Frank Capra’s movies. I recommend this movie with all my heart because you will not be disappointed and it will remain in your heart, I hope, forever.

Director: Woody Allen     Starring: Woody Allen, Diane Keaton, Tony Roberts     Genre: Comedy, Romance “A relationship, I think, is like a shark. You know? It has to constantly move forward or it Read more…