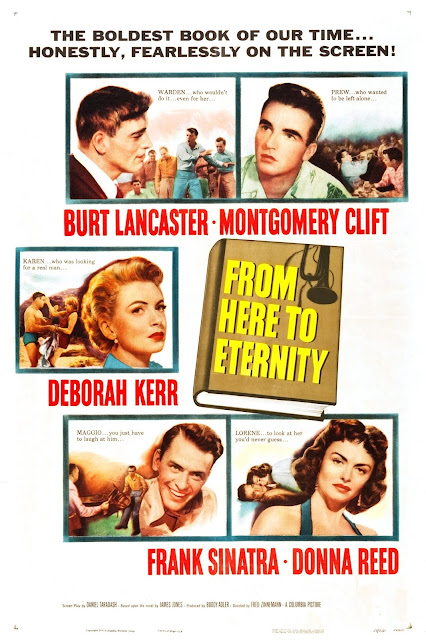 “A man loves a thing, that doesn’t mean it’s gotta love him back.”

We are heading back to the origins of the blog for this astonishing movie: From Here to Eternity (1953). There are a lot of emotional moments, I will mention them later. And the heartbreaking part is that some of the events happened.

The story presents Robert E. Lee Prewitt (Montgomery Clift), a career soldier, who is transferred at Schofield Barracks in Hawaii. He is known as a talented boxer and Captain Holmes suggests him to join the boxer team, to secure his promotion after a competition. But Prewitt refuses because he stopped practicing after a terrible event, when his friend suffered an accident, because of which he became blind. His refuse isn’t understood by the Captain, who makes his life as miserable as possible. Prewitt meets the First Sergeant Milton Warden (Burt Lancaster), who tries to convince him, for his good, to give up on his idea of not competing.

Prewitt becomes a good friend with Angelo Maggio (Frank Sinatra), who is one of the funniest soldiers from the regiment. One night, after they got their pass, Prewitt and Maggio spend their time at the New Congress Club, a gentlemen’s club, where Prewitt falls in love with Lorene. It is pretty difficult for him to be with her, because of all the restrictions he’s got after his refuse of competing at that boxer tournament. They both feel lonely, the main reason for their attraction.

Meanwhile, Warden begins an affair with Holmes’ wife, Karen, who is very neglected by her husband. The scene on the beach with them is an iconic one, which I liked a lot because it was one of those moments that was real. They try to find solutions to stay together because if Warden is caught, he will suffer a prison sentence. All of these events happen right before the Pearl Harbour attack. That’s all you need to know about the plot because you must watch this amazing movie. There were 2 moments when I almost cried and in the end, I had a void in my soul. I want to mention the moment when Prewitt played the trumpet in that morning, which broke my heart.

On the acting part, everyone was just perfect, from Montgomery Clift, Burt Lancaster, Deborah Kerr to Frank Sinatra and Donna Reed, who created unforgettable moments, filled with emotion. I must mention Fred Zinnemann, the director, who created this masterpiece. The Screenplay, cinematography, sound, and editing are at the highest level, which is why this movie won 8 Oscars, including Best Picture, Best Supporting Actor (Frank Sinatra) and Best Supporting Actress (Donna Reed).

What an incredible movie! It will certainly remain in the history of cinema as a classic one.

“It’s not confidence, ma’am; it’s honesty. I just hate to see a beautiful woman going all to waste.”